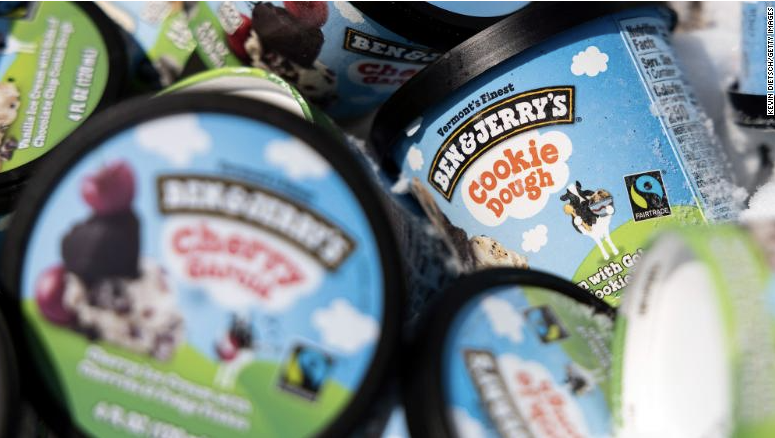 On July 19, 2021, Ben & Jerry's (the ice cream maker subsidiary of Unilever Corporation) announced that it would no longer sell its products in the area it described as "Occupied Palestinian Territories," nor renew licensing agreement with its local Israeli manufacturer. The founders of Ben & Jerry's, Bennett Cohen and Jerry Greenfield, also published an op-ed in The New York Times, supporting the decision of the company they started (but no longer operate).

We are the founders of Ben & Jerry’s. We are also proud Jews. It’s part of who we are and how we’ve identified ourselves for our whole lives. As our company began to expand internationally, Israel was one of our first overseas markets. We were then, and remain today, supporters of the State of Israel.

But it’s possible to support Israel and oppose some of its policies, just as we’ve opposed policies of the U.S. government. As such, we unequivocally support the decision of the company to end business in the occupied territories, which a majority of the international community, including the United Nations, has deemed an illegal occupation.

That we support the company’s decision is not a contradiction nor is it anti-Semitic. In fact, we believe this act can and should be seen as advancing the concepts of justice and human rights, core tenets of Judaism.

The decision to halt sales outside Israel’s democratic borders is not a boycott of Israel. The Ben & Jerry’s statement did not endorse the Boycott, Divestment and Sanctions movement.

The company’s stated decision to more fully align its operations with its values is not a rejection of Israel. It is a rejection of Israeli policy, which perpetuates an illegal occupation that is a barrier to peace and violates the basic human rights of the Palestinian people who live under the occupation. As Jewish supporters of the State of Israel, we fundamentally reject the notion that it is anti-Semitic to question the policies of the State of Israel.

Officials of the Israeli government, including Prime Minister Naftali Bennett and Foreign Minister Yair Lapid also issued statements condemning Ben & Jerry's corporate action. Bennett spoke with the CEO of Unilever and vowed "a vigorous response to the Ben & Jerry settlement ban." In a separate statement, Lapid opined that "Ben & Jerry's decision represents shameful surrender to antisemitism, to BDS, and to all that is wrong with the anti-Israel and anti-Jewish discourse." Lapid went on to say that he would urge the more than 30 US states that have passed anti-BDS legislation to enforce the statutes against Ben & Jerry.

In response to Ben & Jerry’s/Unilever’s action, the Jewish Federations’ Israel Action Network coordinated with local Federations to encourage states with anti-BDS legislation to explore if those laws apply in this case. Eleven of these 33 states have pension funds which are either current or potential investors in Unilever and may be able to take action with the goal of having Ben & Jerry’s reverse its decision. Several states, including New York, Florida, Illinois and Texas, moved to determine if their anti-BDS laws could be applied in this case.