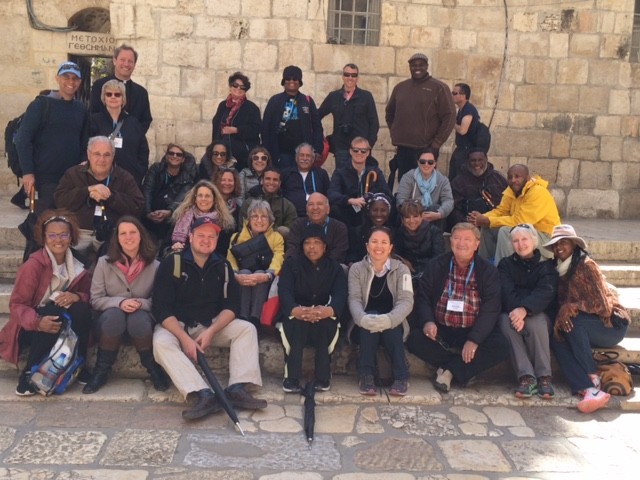 It was a very intense day today with a deep dive into West Bank, Settlers and Palestinians as well as the Holocaust.

Today, we drove to Efrat in the Gush Etzion - the West Bank. We met with the charismatic Mayor of the town, Oded Revivi. Oded, it turns out, is the son of my dear colleague Menachem Revivi who was responsible for joining the UJA-CJF office in Jerusalem many years ago.

Efrat is a religious commuting suburb for Jerusalem. Most of its founding members came from Englewood, NJ, following their Rabbi Shlomo Riskin. It is a community of 10,000, one third are immigrant adults, mostly "Anglos" from English speaking countries. Fifty per cent of the population are under age 21. Twelve per cent of the new homes being built will be purchased by returning children. Mayor Revivi shared some of his challenges as Mayor of this 5 mile long and 2 - block wide city. It is, he said, the only city on the West Bank that is not surrounded by a security fence. Jews and Arabs live side by side with one another without violence. In fact, they banded together to oppose the creation of a fence.

"If you build obstacles, you only raise the level of challenge to overcome it and there is no end to this game," Revivi said.

Prior to 1996, there were government incentives to move to Efrat. This was challenged in court and that practice was ended. The government still supports the cost of services. Homes range in size from one bedroom to single family homes and costs range from 150K-1.5M shekalim.

Bob Lang, a resident and member of the Religious Council took us on a bus tour through the city showing us the many neighborhoods, schools, a community center, and a forest planted by the Jordanian National Fund.

After leaving Efrat, we drove a few kilometers down the road to meet with two individuals who are a part of "Shorashim", "roots".

Rabbi Hanan Schlesinger shared his thoughts as a Jewish Zionist settler. He lived in the land for 33 years before meeting or really seeing a Palestinian. "They aren't part of my story and therefore aren't really there". "We live here with no contact - different languages, legal systems, schools, calendar, elections, time zones, and more. We live in ignorance and fear of the other."

As a Jew, living here is about being a people in the promised land that G-d showed to Abraham 3000 years ago. As a Zionist, it is to consummate his Judaism in fulfilling the biblical prophecy to come out of exile both physically and spiritually. As a Settler, it is Judea and Samaria, a Jewish historical religious statement found in the biblical Book of Kings. After his wife came home traumatized from a shopping trip to a Palestinian-owned business, he decided to do something proactive.

Rabbi Schlesinger was invited by a Protestant pastor in Virginia to meet Palestinians and he said yes! He decided that we all must make room for another's truth and dignity as human beings. Together they participate in Roots, an Israeli-Palestinian initiative for understanding, non violence and transformation.

Ali Abu Awwad's brother was violently murdered by Israeli soldiers. Ali's first thought was to revenge the killing. The only justice would be to bring his brother back. Ali went to prison at age 17 for four years; he was a freedom fighter. After participating in a hunger strike for 17 days, he said he found the power inside himself to become the "captain of his soul".

Ali shared his thoughts about leadership, suggesting there were many politicians but no leaders who are willing to work toward one another's freedoms. With endless killing, no one will be left standing at the end of the day.

He decided that the best revenge was to meet "the other". An Israeli religious parent called Ali's mother and invited her to join a group of bereaved parents. Ali's mother was a PLO leader of the region fighting Israelis. He accompanied her and for the first time saw an Israeli crying for the loss of their child. It was the first time they saw tears, hearts, faces of Israelis as victims rather than soldiers. "Only those who paid a high price can understand the other".

After a lunch in the Yad Vashem cafeteria, we went through the memorial/museum with a wonderful guide, Liz Elsby. Yad Vashem was created in 1953 by survivors who had no place to mourn the six million who were murdered during the Holocaust. It was purposely placed next door to Har Herzl, the "Arlington"of Israel. We walked through the children's memorial dedicated to the 1.5 million children who were murdered; many of them had no known names. The 4 candles represented a fragile light source.

We discussed the missing Madame Steffa at the impressive Memorial to Janus Korczak who chose to accompany his children to Treblinka. And at the Avenue of the Righteous, we honored those 25,680 individuals who saved Jewish lives and brought light from the darkness. We stood by the sculpture by Shlomo Selinger, a Parisian cousin of former Federation president Jeff Medoff.

"Israel didn't come into being because of the Holocaust. Despite the Holocaust and what those mustered could have given the world, the Jewish state still came into existence."

The hall of names has collected only 4.5 million names to remember. Yizkor. Yad Vashem is a warning, a wake-up call to the world, not only about what was done to the Jews, but also as human beings, the importance of looking at what is happening to all people throughout the world. We must learn the story over and over again and make it relevant in the future.

Behind us was the Moshe Safde designed museum/memorial structure representing indifference. In front of us were the beautiful mountains and future of Jerusalem.