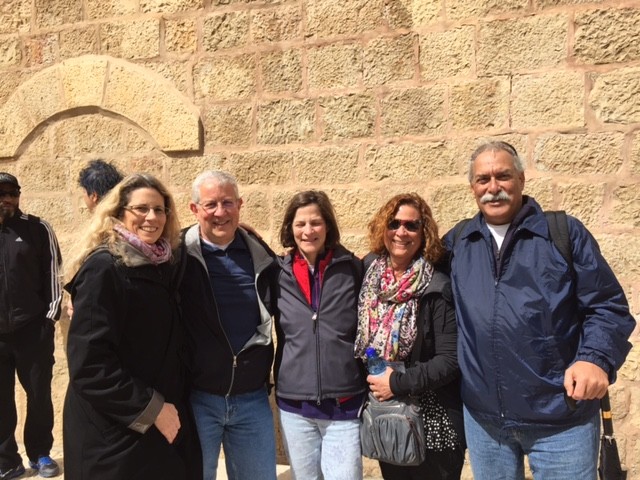 We started our day with an excellent briefing by Reuven Hazan about the differences between the Israeli and American systems of democracy. After describing each (e.g., must be in the country in Israel to vote, winner takes all in the U.S., security is the number one issue in Israel, etc. - happy to enumerate later), Reuven described going to a football game in the U.S. while in Boston for a sabbatical year. He took his sons as guests of the owners. When told it was football, they expected the teams to be kicking the ball rather than carrying it. All three rose from their seats and cried "penalty!!'. The owner said "Reuven, sit down! Here in America, other than a few kicks we play football with our hands." That's how different the two democracies are!

We left for the old city and immediately bumped into David and Abby Feinstein from Greensboro! David is planning on running a marathon at the end of the week.

We were shepherded through the places of kings and prophets, of David, of Jesus, of religion's beginning, of history, of Yochanan Ben Zakai, of quarters, and of archeology. After a quick lunch in the Christian Quarter, we split into two groups - the Cardo shoppers and the City of David archeologists.

And if that wasn't quite enough, after reuniting, we once again split into two groups and tasted the cuisine of Israel while on a culinary walking tour of Machane Yehuda! We laughed a lot while tasting Kurdish, Georgian, middle eastern, and yes, natural foods. I loved one story in particular that we were told about the dubious Georgian food....

A legend: when G-d created the world, the Angel Gabriel came and distributed land but the Georgians didn't come because they were feasting at a banquet. What about us?, the Georgians asked Gabriel. You see, Gabriel had given out all of the land he had to give. The Georgians brought Gabriel to their table and asked him to sit down and partake in their hospitality.They shared with him that their luscious table was in honor of G-d. Gabriel then gave up his portion of land for the Georgians!

We saw some of the spray-painted artists' shop doors in the market after dark with faces of famous people like Menachem Begin and Steven Spielberg. And the market comes alive after dark with young people out for a night on the town.

Home at the hotel, Rabbi Havivi and I hosted former Greensboro residents, Boaz and Ronit Roseman (who had returned to Israel), as well as Paige Feldman and Leah Spellberg (friends of Shira and Noa) who are studying in Israel for the semester.