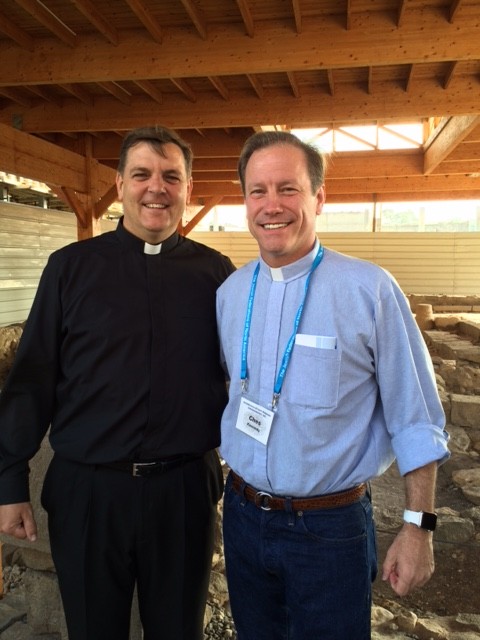 I am starting by writing with detail about an amazing day and incredible first stop. Father Timothy Meehan, of the Legionnaires of Christ, spoke with us at Magdala in this first century town and synagogue dating back to the year 19. This place on the Sea of Galilee - the Kinneret - was, according to Father Meehan, "the first calling of a crossroads between Jewish and Christian holy culture".

Magdala has one of only seven first century synagogues found in Israel. It was not a place for prayer, sacrifice or pilgrimage. It was a more of a town hall where the reading of the Torah, the laws of the revelation of God, were read. There were several different rooms, including a Beit Midrash study hall where the "Seat of Moses" could be found, which was most likely where the leader sat. Next was a Beit Knesset, a house of assembly, with mosaics, frescoes and coins dating to the year 29. Magdala and Kfar Nachum (Caperneum) were places where Jesus taught.

The Legionnaires purchased Magdala from a seaside bungalow resort which was in bankruptcy, in hopes of building a center (Institute for the Dignity of Women to fight against trafficking, prostitution and domestic violence) as well as a church to honor Mary from Magdala. Mary was known as a follower of Jesus who was present in every significant moment in the life of Jesus. Jesus had definitely spent time in Magdala teaching and keeping away from the nearby Roman encampments.

We were brought in to a magnificent place of prayer for women, right on the Sea. The room contained a boat chapel with an extraordinary painting of a woman touching the robe of Jesus, which was made holy.

Two women were sitting quietly in front of the large painting which our group was viewing. One was wearing wearing a Jewish star and the other woman was dressed in traditional Arab garb. The woemn were speaking with one another when we entered the chapel. A group of tourists from Florida walked in and immediately asked the two women rather rudely to move so they could take a photo of the painting. It reminded me of my favorite Yehuda Amichai poem, The Tourists (which I later read on the bus). I went up to the women, met them and found out more about what they were doing. Later that day they would be the speakers about women and leadership at a conference on the dignity of women. And I was fortunate to have taken their photo in front of this lovely painting!

After beginning construction, archeologists became involved when they uncovered the Magdala Stone, which had all of the representations of the Temple on it: Altar of sacrifice, columns, menorah, urns for water and oil, holy of Holies, bread, loaf offering, takes to clean after sacrifices - how remarkable! The Israel Antiquities Authority has been involved ever since. So far, they have raised $100 million for this project.

The Temple is where the presence of God for Israel was found. When does the synagogue become a place of worship? Does the reading of the Torah make it holy? Doesn't a charismatic leader move people in a profound way?

As wonderful as the place was (my first visit), it was Father Meeham's teachings that were truly memorable as they pertained to our group:

*Strength to things that unite us; bring hearts together get rid of stuff that divides us.

*Look at the beauty of people.

*Every time we go somewhere with someone else, the place and the experience become unique.

*This is a place for people to encounter themselves.

*The world has come to the point of breaking barriers *overcoming fears to embrace another person makes us better people.

*Transformation in each of us will help us obtain full dignity, and will make the experience of human life more beautiful.

From there, we visited the traditional sites of the Mount of Beatitudes, Tabgha and Capernaum. Eighty per cent of what happened with Jesus happened in these places. We sang together and heard devotions and readings from the New Testament.

And that was just the morning!

Our bus climbed to the top of the Golan Heights for a visit to Har Bental to hear a security/border perspective and view Har Hermon (with a bit of snow), Lebanon and Syria. We saw two UN peace watchers and their huge binoculars! (A light pizza lunch!) and then it was onto Kibbutz Afiq where Marla Van Meter, a Californian who made Aliyah some 25 years ago, joined us to share her story at two amazing vistas of the border with Syria and Jordan, and later of the sunset over the Galilee. She came "to paint the Golan green" and to live her dream. So fascinating to learn about borders drawn up arbitrarily by man vs by topography. At one of the kibbutzim, they are producing biogas and have a water reclamation plant. I hope to share with Gail Joseph who will visit Israel soon. We dined there at Kfar Haruv.

We then returned to our hotel in Tiberias.