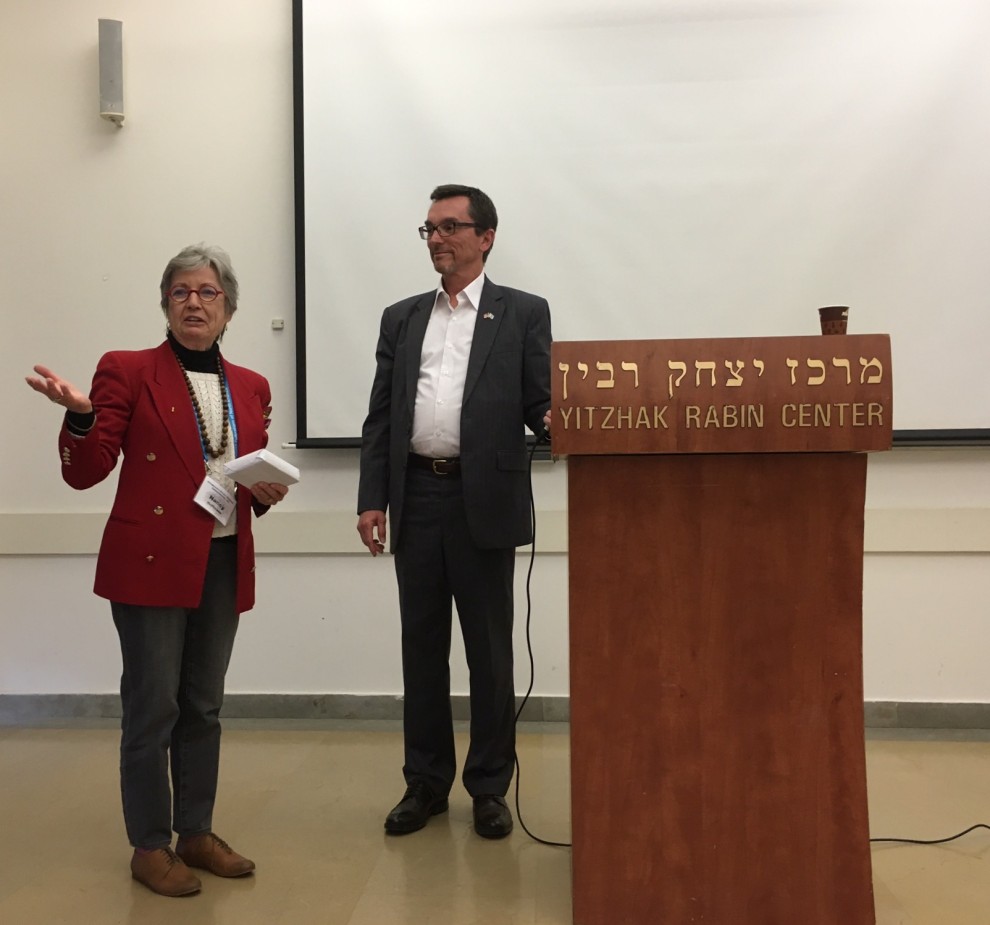 "Zionism up to the present in Tel Aviv".

Tuesday was a very full day. We walked the promenade just outside of our hotel, with the ancient port city of Jaffa visible just down the beach.

We started our day in Rechovot where we visited the Ayalon Institute, where a clandestine kibbutz once operated below a laundry and bakery to produce 4 1/2 million bullets during the British mandate. We spoke of the modesty of the generation who built Israel, about Zionism, and some of the early organizations and brave individuals who helped to build the Jewish homeland.

At Independence Hall in Tel Aviv we learned about David Ben-Gurion's proclamation following the UN vote to create the state of Israel. At the Yitzhak Rabin Center, we followed two parallel stories - one of Prime Minister Rabin and the other about worldwide events that occurred during his lifetime.

"Extraordinary privilege has fallen to my lot. I have done things I barely dreamed of, or hoped I would do." said Rabin.

Rabin started his career as an army man and at the end of his life came full circle serving as a diplomat and eventually becoming Israel's prime minister. We shared our individual stories about where we were on the day that Rabin was assassinated at the end of a Tel Aviv peace rally. And we saw video clips and sat in quiet contemplation in a room filled with memorial candles at the end of the exhibit.

A poem by Israel's poet laureate completed our visit:

The Place Where We Are Right

From the place where we are right flowers will never grow in the spring.

The place where we are right

is hard and trampled

But doubts and loves

dig up the world

And a whisper will be heard in the place where the ruined house once stood.

Bill Grant, Deputy Chief of Mission of the Israeli Embassy, met with us to discuss the Embassy's role in Tel Aviv. Vice-President Joe Biden arrived in Tel Aviv on Tuesday evening. Some of the topics we covered included the partnership between Israel and the United States, bilateral projects, peace in the Middle East, security for all Americans traveling abroad, and the relationship going forward in the years to come.

As we ended our day with a visit to a beautiful restored Templer community which now houses the Sarona Marketplace and then visited the Tel Aviv Museum of Art. Events unfolded there as we heard of the horrific news of the stabbings in Jerusalem, Petach Tikvah and Jaffa. We felt especially vulnerable regarding the Jaffa stabbings, where we had driven through earlier in the day and some of us had even jogged there earlier in the morning. Life goes on here in Israel as it is the only way to continue forward. I texted my family and emailed the federation staff to let them know we were safe.